I just upgraded to KDE4.2 today on Kubuntu Interpid. One of the first items I am testing is the ability to use the display on my laptop and the monitor/projector at the same time. This is known as multihead and previously the Xinerama was used to have two different screens with one X server (the engine behind the graphics display on Linux).

The KDE 4.2 Plasma control (top right corner of the screen) Zoom Out function allowed the laptop screen to have a different background and widget from the monitor/projector. This really made an impressive environment for customisation.

This is great for presentation as the OpenOffice.org 3 have full capability to show the slides on one screen while previewing on another screen. The KDE4.2 provided the variable KDE_MULTIHEAD=false that allowed the same display for both the displays. Initially I changed this environment variable to true, but nothing happened.

The Intel site http://intellinuxgraphics.org/dualhead.html gave some good tips to get what I was looking for. The steps below allowed the multihead function to work when the VGA cable is plugged at the Login screen. To revert back to the dual head (where both laptop and monitor/projector displayed the same output), return to the Login screen and unplug the VGA cable. The X server should be restarted.

Step 2: Replace the xorg.conf with the following

Step 3: Reset the X server
Logout and restart the X by pressing Alt+e
Login again and you should have the new setting applied.
No comments:

After having a stable KDE 4.1.9, I decided to test the Java compiler installation from Sun.


Installing java
Step 1. Be connected to the Internet. Check the Java version and details prior to installation then install Sun Java Development Kit.

Step 1: Below is the traditional Hello World example for the Java program called Hello.java

KDE 4.2 beta is great, wireless not

After the KDE 4.2 upgrade things seem very promising. Here is my Desktop with the Desktop applet, clock, sticky note, crystal monitor 8, Dolphin file browser and the panel (bottom of screen). 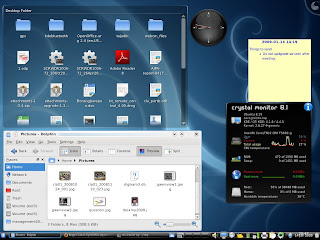 The KMenu with widget style "cleanlooks" and windows decoration as "Oxygen" looked strange with the black borders. Commonly accessed applications works very well, including the OOo3.0.1. 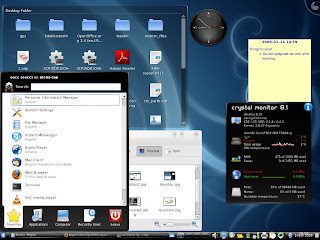 After upgrade the networking broke (most annoying was the wireless). Following are replacements apps;

1. KWlan
The KWlan which comes from standard ubuntu repositories provided a nice applet to replace the the default network manager. But the installation removed the initial KNetwork Manager which stopped the Network Manager. Wireless was still not working properly as I did not see the WPA option, only WEP connection was available. Checked the iwl3945 but it gave a blank output;

You need to restart networking with the following command;

2. wcid
Wicd is an alternative tool which is not dependant on KDE. With installation instructions from wicd, it brought back networking to normal state. Future Kubuntu may include wicd.

Select wired/wireless name and choose the small triangle to expand the menu. Enter the requied fields and choose "Connect". This shows a blinking colour for data tx/rx. Simple and nice!
1 comment:

Following the KDE progress to KDE 4.2 indicates that lots of the problems/bugs I am facing in Intrepid's KDE 4.1 can be resolved. Primary reason to use the KDE 4.2 beta 2 is to resolve an issue of OOo3 from PPA that works on GNOME but crashes in KDE 4.1.

QPainter::begin: A paint device can only be painted by one painter at a time.
QPainter::setWorldTransform: Painter not active


Installation is is based on Kubuntu News (http://www.kubuntu.org/news/kde-4.2-beta-2)
I do not have koffice-data-kde4, installed so skipped that step.

The initial OpenOffice.org 3.0 gives a continuous error as shown below.

QPainter::begin: A paint device can only be painted by one painter at a time.
QPainter::setWorldTransform: Painter not active

Here, I explain how to remove the OpenOffice.org installed via the Kubuntu mainstream.

Surviving an OSS migration in 2009

Over the past couple of years, numerous efforts have be undertaken to seek benefits of adopting open source software (OSS) from individuals, corporate to governments. There have been successful adoption and others who have had to rake out more cash to revert back to proprietary software. Based on such events, here are my predictions to survive an OSS migration in 2009.


OSS will be around for a long time. Proprietary systems will seek ways to leverage on OSS instead of fighting them. You will survive.
No comments:

The 3com ADSL router, 3CRWDR100A-72 although have been discontinued, is very reliable. The 4 ethernet ports and support up to 34 wireless devices is more than sufficient. I tried to upgrade the firmware to version 2007. Only Wine was needed as the download was a ZIP in exe format. Found that I cant connect/dial into the ADSL provider after the upgrade.

I am down grading firmware to version 2.06 (Sep 21 2005) and now it works. Downloaded the firmware from http://www.3com.com website. The administration page is slightly changed. Here is the nmap finger print.

The wireless anthena is not detachable but it have separate grounding. For security, the remote web access is disabled by default (port 8080). Instructions for the router can be found at portforward.
No comments: